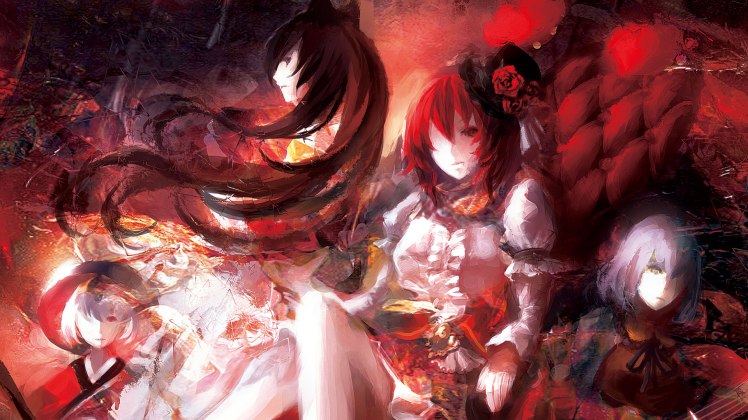 Definitely my favorite Touhou album from C85 –I believe I’ve already said this- and, among some other CDs, my most recent add to my physical collection. Thinking about it, among all the CDs I like by pizuya, I only miss “Violet Lotus Requiem”, but I’ve already organized myself to get a copy of it from some kind of obscure shop which still have it… if it doesn’t get out of stock from a day to another like Foreground Eclipse’s “Whishes Hidden In The Foreground Noises”. Talking about importing CDs, recently Toranoana announced that from now on they will be shipping goods overseas, which is great! Hopefully this will also mean less expenses but I still can’t be too sure about this. The day I’ll decide to import goods through it, I’ll see how it’ll go.

Meanwhile, I’m still waiting for a Grand-Guignol 2. While I’ve enjoyed both pizuya’s latest two albums, probably because of their style –I find them too “confused” overall, they want to be too many genres at once- I ended up liking them but not loving them and for me they’re simply not as good as, let’s say, a “Clair de Lune” or a “Nouvelle Maliee” –just to not mention my two favorite album by pizuya again.

Note that I have no idea if Futoumeido actually wrote the lyrics for “Grand-Guignol”, but, considering she wrote the one for “Farce Silhouette” and that song is full of katakana as well, the lyricist may be her, but that’s it. Maybe I should ask Futoumeido one of these days if this is true or not. On a more important note, be aware this song is full of archaisms –if they can be called “archaisms”- and consequentially, I’m not sure about this translation and in some parts, not even about romajis –probably it’s just Futoumeido’s pronunciation, but still.

“手ノ鳴ル | Follow”; just another reference to “大人の鬼ごっこ”, a Chinese variation of the game of tag, though this time there’s not the “Oni”. This phrase actually means “The clapping hands come from there” but I personally don’t think it fits the translation and thus why I changed it. Also, the “phrase” immediately above literally means “See love for the first time” but I’ve decided to remove the “first time” part because I don’t think it’s actually relevant this time and in this way I can keep the metrics similar to the Japanese one.
“凶鳥謡 | Ominous”; literally, “The bird of bad luck sings on the dark road” but it’s quite too long written in this way in my opinion.
“絡ム玻璃 | To the judgment”; literally “Entwined/involved the judgment of quartz/glass”. Honestly, I have no idea what this is supposed to mean. It may be a reference to some sort of legend, but I couldn’t find anything. My thoughts about this and about the song itself are that the lyrics simply wants to recall the essence of “Grand-Guignol” and thus its purpose of communicating insanity, panic, fear and overall strong emotions through its plays.
“桟敷ノ | You, surrounded”; literally, “The box/gallery of (your) true colors surround you”.
“幼キ夜ノ | When”; considering how it’s written, it’s probably a reference to the “真ノ序ノ舞”, “shi no jo no mai”, or at least that’s what I thought when I saw it –and as usual I may be completely wrong. Aside this little consideration I’m not so sure about, I have translated this part a lot liberally because the actual translation means nothing –“Dance the truth of the attendant of the childish/young night”- and because some words seems to have been separated –i.e. “夜伽” is an existing word and I’ve assumed “夜ノ伽” has the same meaning.
“夜ノ姿 | As the night’s”; literally, “The shape of night”. A similar thing happens a few lines below where “獄ノ形” means “The shape of prison”.
“衆合ノ火ノ燃ユル | Is burnt by”; “衆合” most likely refers to the 3rd Buddhist Hell, or Naraka. I believe it should correspond to Samghata but, considering I know just a few about Buddhism, I preferred leaving a generic “Hell”.
“迷ヘ六ツノ | Wandering”; I believe it’s a reference to the “Six paths of reincarnation”, though I can’t be sure. Also, keep in mind that “此処ガ常世” means “Here is forever”. Even if I’ve translated it as “Here, forever”, note that this phrase can also mean “This is the land of the dead”.

You, surrounded by
Your true colors
Mistaking even opium
For a cheap mist

Blooming in my body

In a crimson dew
Illusions are decaying

When you born
Sitting in that place
Far away, the words of
Izanami resounded

You, embraced
As the night’s dark
Is burnt by the Hell’s flames
Within this prison

One thought on “Grand-Guignol ~ Pizuya’s Cell”

Unauthorized use and/or duplication of all the translations and written material for any kind of commercial purpose, direct or indirect, without express and written permission from the author is strictly prohibited. All the translations and written material may be used for non-commercial purpose by giving credits to the author and a link back to this blog. All the original lyrics and illustrations are copyright by their respective authors.

Any translation done before the second half of 2016, unless revised, is most likely bad. The reason of this is written in my “about” page, if you’re interested. If you want a revision on a specific (old) translation, just let me know with a comment or a message~